Having recently read a post about using state machines in JS, I decided to try implementing the same logic using the (relatively) new gen_statem.

As ever, the code is available here.

The initial example is a naive representation of a bank account: 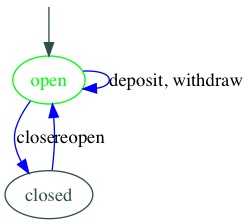 The first step is to fill out the gen_statem boilerplate:

We return an initial state of open, and a map containing the initial balance of 0.

I also added a get_balance call, so we can inspect the current data (which would normally be referred to as the “state” in a gen_server, confusingly).

The first state transition is to close an open account:

The function name tells you which state this can be called from (open), and the return value tells you that the state machine would transition to a new state (closed), as well as returning a value (the atom closed) to the caller.

Deposit & withdraw are a little different:

In that they retain the current state, but the data (in this case, the balance) is updated. Guards have also been used to validate the arguments; again, any other calls will cause an error.

This will seem pretty familiar, if you’ve ever used gen_fsm. Next time, we’ll look at the new alternative callback mode: handle_event_function.